The fifth in a series of weekly lockdown-inspired market commentaries; this week’s edition an almost day-by-day account of the week that was.

As I write this, the United States has, staggeringly, surpassed 1 million confirmed positive COVID-19 cases though there is some strong evidence of curve flattening from that geography. The world has nearly 3.1 million with, sadly, more than 210,000 people succumbing to the disease. South Africa’s positive case count is approaching 5,000 and the number of deaths is approaching 100. The most recent press release from the South African Minister of Health, Dr Zwelini Mkhize, indicates an increase in the case count over the previous day of more than 250; perhaps justifying the cautiousness of only moving to Stage 4 on the 1st of May. Whilst its only been just over a week since I last wrote to you, it certainly feels longer than that as there was something noteworthy on almost every day of the last week.

On Monday the West Texas Intermediate oil contract for May delivery fell to -$37 a barrel; the first time it has ever gone negative. Traders were scrambling to find buyers who could take physical delivery of oil as storage space maxed out. Whilst this was highly technical in nature and was largely occasioned by there being just one place, Cushing, in which to take physical delivery, it has dragged the spot (current) price of oil lower. Brent, the more widely used oil price benchmark, is now trading at just under $20 a barrel. As usual, we include charts on the oil price in our weekly Chart Book which can be found here and, at the time, Forbes also put out a fascinating article about the United States Oil ETF which we encourage you to read here and then we suggest you take a moment to think about all physically backed ETF’s out there…

On Tuesday President Cyril Ramaphosa took to the airwaves for the fourth time since the novel coronavirus crisis began. This time to announce a R500 billion package of measures (roughly 10% of GDP) aimed primarily at supporting the poor, undernourished and unemployed and to provide loan guarantees of up to R200 billion through the retail and commercial banking systems to businesses whose cash flows have been adversely affected. Our estimation is that the net increase in liability for Treasury is in the order of R40 to R60 billion. Not quite as alarming as the headline R500 billion number but a further deterioration in government’s finances nonetheless. Evidenced by the slippage seen in the South African 10-year benchmark yield which has begun to move towards 11% again. South Africa does, though, have the option of borrowing $4.2 billion (approximately R80 billion) from the International Monetary Fund for between 3.25 and 5 years at a rate of interest of just 1% but it is critical not to forget that this has to be repaid in dollars with what are likely to be much weakened rands 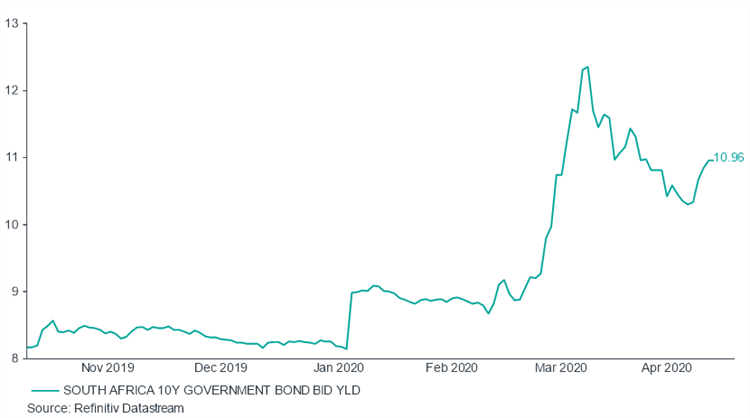 Also on Tuesday, news began circulating of an imminent default in Land Bank debt. This would automatically trigger defaults on other Land Bank debt (known as “cross defaults”) totaling R50 billion but given how important it is to food security in South Africa, always a pressing issue but even more so now, and that the majority of the debt is guaranteed by the South African government this wasn’t a market-wide risk event. NFB Asset Management has interrogated a number of funds on their Onshore House View and no single fund has more than 3% exposed to Land Bank. We learned later in the week that the Industrial Development Corporation and Futuregrowth Asset Management are in negotiations about stepping into the breach depending on the extent and nature of the Government’s backing.

On Thursday, President Ramaphosa made his fifth COVID-19 speech, introducing the 5 stages of relaxation from the present ‘hard lockdown’ situation and confirming that South Africa would be moving from Stage 5 to Stage 4 on the 1st of May. Our COVID-19 Response Team is busy formulating/updating our Business Continuity Plan. We expect to be able to communicate further with you on this during the week. On a related note, the NVest Group is pleased to confirm that it has made an amount of R430,000 available toward charities in the Eastern Cape to assist them with food distribution and the acquisition of masks.

On Friday, South African Minister of Finance, Tito Mboweni, coloured in the lines sketched by President Ramphosa during Tuesday’s economic relief speech. Mboweni specifically noted that aggregate monetary and fiscal stimulus announced thus far amounted to R800 billion. Not terribly far off the R1 trillion the market has been speculating about over the last two weeks. With silence from Government thus far on items like prescribed assets and once-off wealth taxes, one does wonder though whether there are additional measures beyond the R800 million being kept in reserve which will be paid for by these more aggressive recovery measures.

There is unlikely to be any let up this week as a slew of important economic data is due for publication including US and Eurozone GDP with the latter also publishing CPI data. GDP data won’t be terribly meaningful as it’s likely to be out of date; CPI data however may be more meaningful. This follows last week’s initial jobless claims data indicating a further 4.5 million unemployed Americans. From a South African perspective, the key piece of economic data due this week is the budget balance which should provide the first insights into the rate at which the fiscal situation is deteriorating and the key piece of market movement is the rebalancing of the World Government Bond Index which is due for completion on Thursday.