The tenth in a series of weekly lockdown-inspired market commentaries; this week’s edition focusing on the macroeconomic environment.

There are two hundred and fifteen geographies with at least one confirmed positive coronavirus case. Topping the list of most to least is the United States with approximately 1.8 million cases. Saint Pierre and Miquelon has just one. Lesotho is second from the bottom with two confirmed positives. South Africa, with 32,600 cases, is twenty-eighth on this list. Adjusted for population size, however, South Africa appears eighty-second with 552 confirmed positive cases per million people. The world average is 805 per million. South Africa’s mortality rate places it in a similar eighty-third position, with Belgium, Spain and the United Kingdom all appearing in the top 5. Whilst the number of cases per million people is probably reflective of the lockdown (or, more likely, of the lockdown combined with a testing backlog and a limited supply of testing kits), the number of fatalities per million people is most likely because South Africa is in an earlier stage of the pandemic whereas European countries are further along and/or exiting. Either way, today is the first day of lockdown alert level 3 for which our economy will be grateful. Our Group’s Executive Committee (having spent much of last week in Board and Sub-Committee Meetings for which you can read the SENS announcement here is meeting tomorrow to discuss our level 3-related return to work, having returned a small complement of our staff to the office during alert level 4. Please be on the lookout for further communication from us on alert level 3 in due course.

As if there wasn’t enough to consider and discuss with a number of nations returning to work over the course of last week, the status of the Phase I trade deal with China, which caused much financial market anxiety late last year/earlier this year, returned to the fore as China sought to impose its security apparatus on Hong Kong and with Trump’s government responding by threatening to remove the South East Asian city’s special trading status with the US. That came almost right alongside Trump’s threat to sever ties entirely with the World Health Organisation which the Republican Party views as China’s puppet. That took us into the weekend’s George Floyd riots and the US President insisting on not addressing his nation on what is a highly divisive issue and for which strong leadership is desperately required. Better news received on Saturday though is that of NASA and SpaceX’s first ever successful commercial manned launch to the International Space Station which you can watch the highlights of here; demonstrating what is possible when people come together (even if they need to remain 6 feet apart from each other). 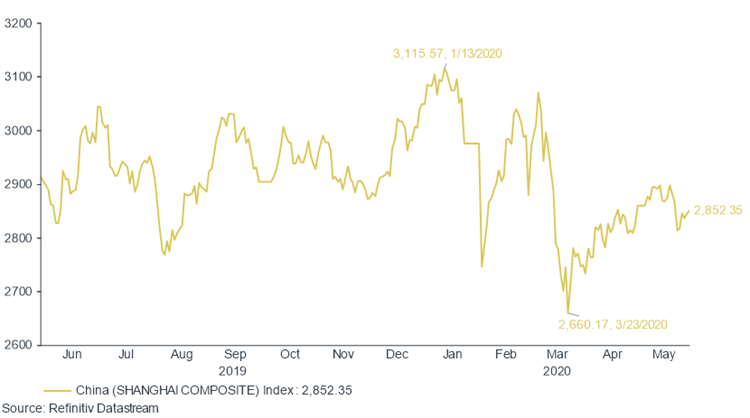 This week there is a meeting of the European Central Bank at which we anticipate an expansion of the 500 billion euro PEPP bond-buying program, which at the current rate is expected to run out in October. The market expects an increase in the order of 500 to 750 billion euros; anything less and there’s likely to be some pressure on European bond markets. There has been about $18 trillion (yes, trillion) in stimulus measures during 2020 alone, including both the US Federal Reserve and the Bank of Japan (BOJ) propping up not just their bond markets but their equity markets as well through the purchase of ETF’s in both instances and the purchase of REIT’s (listed property shares) by the BOJ.

Thus far, the South African Reserve Bank’s (SARB) market-intervention policies have been relatively muted and, credit where credit should be given, has resulted in a broadly more functional bond market than might otherwise have been the case. Expectations are that the SARB will continue to intervene but is unlikely to do so with aggressive monetary policy techniques like outright quantitative easing and/or yield curve control; preferring instead to dramatically lower the cost of funding by lowering the repurchase rate. Expectations are that there is a further 0.25 to 0.5% in rate cuts to come; most likely at July’s meeting of the SARB’s Monetary Policy Committee. This is actually a bit less in rate cuts than was previously anticipated as the market has now moved on to expecting that rates will remain lower for longer and therefore the need to cut as deeply may not be as great as previously thought. Joining the monetary policy authorities in providing support, is government’s intention announced this past week to create a R350 billion infrastructure spend in addition to the R500 billion in previously announced COVID-19 support measures. And we haven’t even gotten to the release last week of the SARB’s Financial Stability Review ...

The FSR indicated four main risks to the South African economy: the coronavirus pandemic, the weak macroeconomic environment, the bank-sovereign nexus (meaning the extent to which government debt sits in bank balance sheets) and high levels of debt globally. It also notes that the main defensive policies launched in late March, early April are yet to take effect but the SARB takes some comfort from the narrowing of bid-offer spreads in the bond market and that banks are currently maintaining their capital adequacy ratios. They are, however, concerned that policy lapses for insurance companies and non-performing loans for second-tier banks, particularly those in the unsecured lending space, will only rise meaningfully in time to come.

Moving back to markets last week, South African bond, equity and currency markets all appear to be behaving themselves with the rand rallying below 17.50 to the US dollar and the yield on the South African nominal 10-year bond also rallying, to roughly 9%. Listed property dynamics remain severely challenged. One of our colleagues, however, posed an excellent question: with the dramatic deterioration in the South African financial position, is there a risk of decoupling, i.e. instead of trading in and around its emerging market peer currencies is there a real risk that the rand becomes the next Argentinian peso or Venezuelan bolivar? Hard to answer but it is a relative risk in that in order to do so the South African financial position will have to worsen at a faster rate than its emerging market peers which include the likes of Brazil and Russia who are right in the thick of some of the world’s worst coronavirus experiences. That may be over simplistic analysis; a conversation on this topic is a good idea. 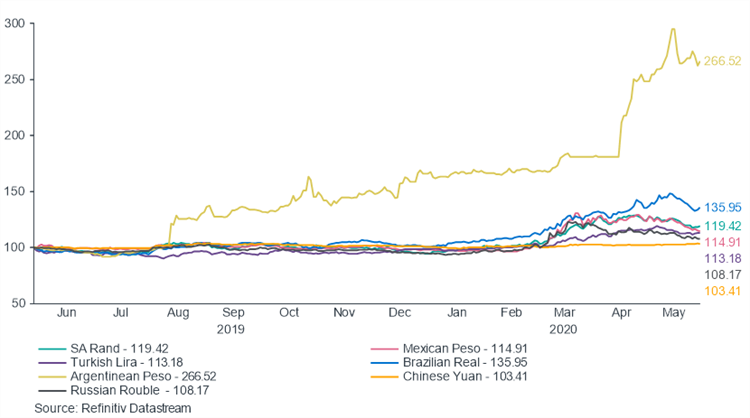 As always I encourage you to make use of the resources highlighted below and to access our weekly pack of market charts here.