The budget speech is on its way. Andrew Duvenage gives his take on what government should do.

Given the precarious state of the South African economy there is no question that government has no option but to implement structural reforms and reduce its expenditure. The time for talking is over. When South Korea ended up at the IMF in the late 90’s, their leadership took stock of the situation and abandoned policies and ideologies that clearly had not worked. Just 25 years later their economy is competitive and their population flourishing. South Africa is at a similar tipping point. It needs to liberate itself from its ideological straight-jacket and abandon policies that have bought the country to this point.

Ostensibly a low-hanging fruit although a complex issue, the public sector wage bill needs to be reduced as a matter of urgency, something that National Treasury has recognised. According to data based on 46 countries from the International Monetary Fund (IMF), in 2017 SA paid its public servants 25% higher than the international average with compensation of 11.6% of GDP compared with the global average of 9.4%. In 2019 public sector employees were paid 15% of GDP. Between 2006 and 2019 payroll costs increased by 10.5% per year, which exceeded nominal growth in GDP.

Tito Mboweni, finance minister, has proposed a wage freeze and natural attrition to try and reign the wage bill back towards international norms. Not surprisingly, unions have not taken kindly to the fact that government is failing to implement the third year of wage agreements and plans to take the matter to the Constitutional Court. If the apex court hears the matter, a definitive ruling on the wage agreement is likely to be made, in which case the decision will be taken out of government’s hands. Government’s position was strengthened by a Labour Court ruling that the former enter into collective agreements only if it can afford to do so and if National Treasury commits to providing additional funds for the agreement. The sticking point is that the Constitutional Court’s decision will apply to all collective bargaining agreements, not just the one between the state and its employees.

As far as state-owned enterprises (SOEs) are concerned, there is no question that government needs to stand firm on refusing to provide further bailouts. It was unfortunate that the finance minister was overruled regarding the bailout to SA Airways given that even well-run airlines are struggling to navigate the challenges imposed by the Covid-19 pandemic.

National Treasury’s recent change in stance regarding government guarantees and its refusal to guarantee the debt of the Land Bank is positive as it raises the bar for receiving government guarantees while at the same time encouraging better corporate governance. The challenge for struggling SOEs is that it raises the cost of funding from public markets which is likely to see their financial position deteriorating – which may mean that guarantees already in place are more likely to be called on. While it has been easy to criticise the state’s lack of transparency around debt guarantees in the past, National Treasury’s recent position paper clearly detailing the pre-requisites for obtaining a guarantee indicates the correct intent.

Critically, if SOEs are to have any hope of becoming sustainable, their boards need to be run without political interference. For too long political interventions at SOEs such as the SABC and Eskom have influenced decisions.

To reduce government’s financial liabilities, one option is to privatise as many SOEs as possible, or at the very least, enter public-private partnerships with investors with business experience and the requisite skills to turn these organisations around.

The failure of B-BBEE

While the intention of transforming the SA economy and removing obstacles to the development of black entrepreneurial capacity is understood, it is difficult to argue that broad-based black economic empowerment (B-BBEE) as a policy has been successful. As William Gumede, associate professor at the School of Governance at the University of the Witwatersrand puts it, B-BBEE has “crowded out genuine black entrepreneurs and killed the development of a mass entrepreneurial spirit in black society because all you need to secure a BEE deal … is the right political connections.”

In many instances B-BBEE has not had a broad-based impact, benefiting only an elite group, causing market distortions and leaving South Africa uncompetitive internationally. Although this would be anathema to the ruling party, B-BBEE as a policy should be abandoned in favour of strategies that help the economy grow.

Higher tax is not a solution

SA currently has one of the highest tax rates in the world. A small pool of around 574 000 people out of a total population of around 59m pay almost 20% of all tax in the country. A spiral of deteriorating fiscal statistics and ever-increasing taxes is fuelling a growing sense of despair amongst taxpayers. Any further tax increases are likely to result in decreased tax yield, as illustrated by the Laffer curve in economics. A mooted wealth tax is likely to result in even more high net worth individuals emigrating or taking their assets offshore.

To encourage the establishment of more small businesses, government needs to remove regulatory red tape which makes it harder for them to establish themselves and employ people. Well-intentioned but abused policies such as affirmative action need to be reviewed while unnecessary regulation which raises the cost of doing business needs to be eliminated. Government needs to provide policy certainty. Minimum wages should not apply to internships or learnership programmes given that most industries would welcome a source of cheap labour without excessive bureaucratic layers. 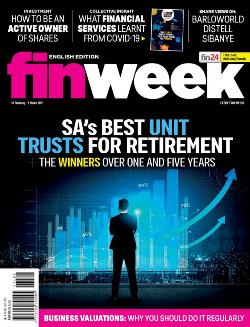 This article was written exclusively for Finweek magazine. You can access the original article here. It was published is the 18 February 2021 edition. Click here to subscribe to Finweek, as a leading financial weekly magazine that focuses on all things investment, you will want to make sure that you don't miss out.