Trade data should rather be read considering the broader state of the economy.

South Africa recorded its first current account surplus in 17 years in the first quarter of 2020 because of a trade surplus of around R208bn.

Economic theory posits that a weakening currency can eventually lead to a higher level of exports, given that these exports are relatively cheap for foreigners with stronger currencies, and lower levels of imports. In theory this is positive as it supports economic activity and growth in a country which in turn has a positive impact on employment, wealth creation, and will even support the country’s currency over time.

A country where this occurred in recent years is South Korea. After being bailed out by the IMF in 1998, South Korea went on to turn its economy into one of the leading manufacturing and exporting countries globally, transforming– and importantly, reforming– from a state of bankruptcy to economic prosperity in less time than SA has been a democracy.

Unfortunately for SA, however, there is little to celebrate in the current trade surplus numbers reported for the first quarter of 2020, given that they did not emanate from any positive economic effects. On the contrary, the trade account surplus is reflective of the dire state of the local economy and a weak consumer and is a serious warning signal of the perilous state we find ourselves in. The economy contracted 2% in the first quarter, the third straight quarter of economic decline.

This contraction is on the back of an economy which has been in a state of decline for several years, with limited nominal economic growth. In real terms there has been no growth. Unemployment was on the rise, even prior to the COVID-19 pandemic, which resulted in consumers feeling under pressure. Not only has this led to a reduction in consumer spending, but a total collapse in consumer demand.

For a country that imports most of its goods - as opposed to manufacturing these items itself - this has led to a fall in the import side of the trade account equation. Despite much talk about growing SA's inability to beneficiate to a greater extent, particularly as far as mineral beneficiation is concerned, the country continues to lag in this area.

What also needs to be factored in is that the first quarter of 2020 coincided with a massive collapse in the price of oil.

While SA pays for oil in US dollars, and the rand weakened through the period, the fall in the oil price would have been more than sufficient to offset the rand’s weakness and translated into less money spent on oil, which is a significant part of the trade account equation.

The dire state of the SA economy has also resulted in a significant erosion of business confidence, which has in turn impacted business investment appetite. The decline in corporate investment spend has a knock-on effect by limiting imports of plant and equipment, which further exacerbates the situation.

Although the full impact of the COVID-19 lockdown on the local economy will only be reflected once the numbers for the second quarter are available, the shock of the virus was already being felt in China and Europe during the first quarter. It is very likely that local exports were impacted during this period as the global economy began to grind to a halt, particularly given that the aviation industry around the world was largely grounded, ships dropped anchors and tourism came to an abrupt standstill. The negative impact on exports would have added to the surplus.

Another systemic factor to be considered is the dire state of the SA manufacturing sector. Declining manufacturing capacity means that we have less need to import the components typically associated with manufacturing.

The reality is that a declining manufacturing capacity remains SA’s Achilles heel in terms of producing a sustainable trade surplus. Over a period, the country has seen a hollowing out of its capacity to manufacture and export. If we are to have any hope of reversing this trend, SA urgently needs to implement economic reforms to ensure it is more competitive on the global stage.

While the trade account and current account surplus could help to strengthen the rand in the short term, the reality is that the rand will be more significantly impacted by investment flows, both in the form of foreign direct investment as well as portfolio flows. 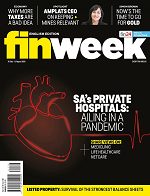 Persistent mismanagement of the SA economy and a lack of competitiveness, coupled with credit rating downgrades and a general aversion to emerging markets, resulted in net outflows of money from local bond and equity markets over several years. It is likely that the direction of these flows of money will have a far greater impact on the rand for the foreseeable future than a somewhat ‘artificial’ trade surplus.

This article originally appeared in the 30 July edition of finweek. You can buy and download the magazine here.