Despite better than expected tax collections in the 2020/21 financial year, SA’s expenditure continues to exceed revenue collections, nudging the economy ever closer to the fiscal cliff.

Despite claims from the finance minister Tito Mboweni that the 2021 budget is not an austerity budget, budget cuts and shifts appeared to be the order of the day which should perhaps not be surprising given that the country has just experienced its largest tax shortfall on record.

Of significant concern is SA’s rapidly rising debt challenge. Debt increases from R3.95 trillion in the current financial year to R5.2 trillion in 2023/24. Without a meaningful and significant commitment to structural reform government is unlikely to consolidate, let alone lower the country’s rapidly unsustainable debt levels.

Structural impediments, including a highly bureaucratic and heavily regulated environment, are making it increasingly difficult for the economy to achieve any meaningful level of growth.

While the finance minister talked about getting the country’s “fiscal house in order” and said he is “hopeful because we are making meaningful progress in the implementation of our structural economic reforms”, the evidence of this progress is limited.

Bureaucratic obstacles continue to hamper growth as is evidenced by, for example, the delay in the allocation of the spectrum, policy certainty around property rights and agreeing the principles of the mining charter including the once empowered, always empowered principle, amongst others.

The provision of reliable energy remains a major challenge. Although government is making the right moves in terms of getting the private sector involved in the Indepdent Power Producer (IPP) space, the pace is far slower than it should be.

Inefficient and badly managed SOEs will likely continue to make demands on the fiscus despite Treasury’s insistence that it has put the brakes on further bailouts. The R7 billion for the Land Bank was therefore not unexpected. Until government is able to put ideology aside and be decisive about unbundling or privatising SEOs, these organisations will continue to be a drain on government finances.

A consequence of government’s inability to implement structural reforms is a lack of confidence in the economy. Business confidence levels are currently at levels last seen in the mid-1980s.

Government’s R791.2 billion commitment to the infrastructure drive is encouraging but needs to be considered in the context of a poor track record as far as implementation is concerned. Despite a recognition of the value of infrastructure spend as a mechanism to kick-start sluggish economic growth, implementation continues to be too slow.

State funds continue to be diverted away from long term capacity building expenditure and is instead being refocused on consumption expenditure. The consequences of this further exacerbates our growing unemployment problem which is currently at a record high of 32.5%.

It is becoming increasingly apparent that the bond market does not believe that the country can manage its debt profile. Consider, for example, that South African 10-year bonds have historically traded at around a 1.5% premium to emerging market peers. Currently this is at more than 4%.

The reality is that seismic shifts are required in terms of government ideology in order to implement the necessary structural reforms required to return the economy to a growth path. Government urgently needs to abandon the idea that it needs to be involved at every level. This path has led to bureaucracy and inefficiency.

Despite the proposed expenditure cuts the reality is that, on their own, they are not sufficient to fundamentally change the trajectory of SA’s debt profile. Until such time that government deals with these structural issues, we will not have sufficient growth to increase the tax base and revenue. And without this growth we will be headed for a sovereign debt crisis within the next four to five years.

We no longer have the luxury of time. 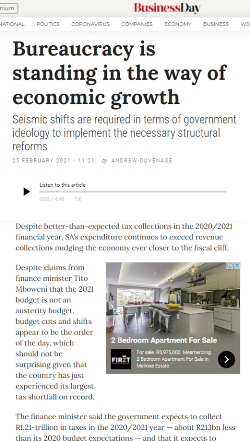 This article was exclusively written for Business Day. You can access the original article on their news platform here.