Rising bond yields are one of the investment risks we’re currently seeing, largely as a result of fears that inflation turns out to be higher than investors expect, however, there are still opportunities in the South African bond market. 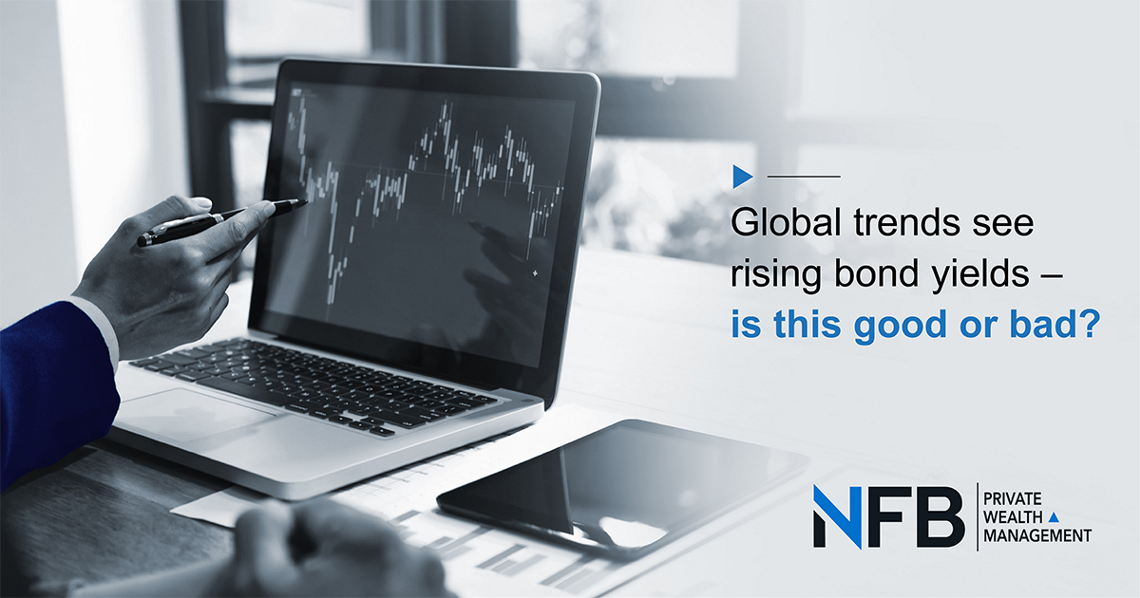 Longer term bond yields have traditionally been considered a fairly accurate indicator of economic growth and investor confidence. There is extensive literature available supporting the idea of the yield curve as a reliable predictor of recessions and economic activity, including changes in GDP, consumption, industrial production and investment.

All investments come with varying degrees of risk. Key is how that risk is defined: is it a permanent loss of capital, volatility or the spread of potential outcomes?

Rising bond yields are one of the investment risks we’re currently seeing, largely as a result of fears that inflation turns out to be higher than investors expect. This is particularly relevant in developed markets such as the US where significant amounts of fiscal and monetary stimulus have been directed at Covid relief programmes. As a result, investors are being forced to reconsider the yield they get from their investments and whether these yields sufficiently compensate for inflation risk.

The sentiment currently is that risk is not being sufficiently compensated for and a consequence of this is that yields are rising. Yields on 10-year US bonds – a key indicator – have gone from 0.5% to more than 1.5% in the last year alone. While a 1% increase might not seem significant, given the trillions of dollars that are physically invested in this asset the impact is significant.

In the EU the European Central Bank – which regards higher yields as a threat to Europe’s pandemic economic recovery - is trying to rein in the rise in bond yields by increasing the pace of its asset purchases. The slow pace of vaccination rollout in the EU appears to be holding back its economic recovery.

The UK and the US – both of which are successfully rolling out vaccination programmes leading to a more positive economic sentiment – appear to be less concerned about rising yields. Yields in the UK continue to rise despite the Bank of England committing to expand its bond buying programmes. Similarly, the US is seeing rising bond yields even though US Federal Reserve Chairman Jerome Powell has committed to keeping interest rates low for longer. The US Fed has gone as far as changing its mandate to achieve average inflation of 2% per annum over a period of time rather than just a breach of 2% being the trigger for higher rates.

Ordinarily these actions would keep yields on bonds from rising. However, if investors are not concerned about rising interest rates then it has to be the risk of inflation that has them anxious. Inflation is arguably the bond investor’s worst enemy. Bond prices typically fall when there is an expectation that inflation will rise, with the result that yields are pushed up.

There is already early evidence that we are headed towards an inflationary environment. The Organisation for Economic Co-operation and Development (OECD) has, for example, lifted its GDP growth forecasts for 2021. In developed markets global manufacturing indices are seeing their purchasing managers’ index – an index of the prevailing direction of economic trends in the manufacturing and services sectors – rising well above the 50 level which is considered expansionary (as opposed to below 50 which is considered contractionary).

Similarly, China’s producer price inflation is accelerating. China has for the past few years been an exporter of deflation, primarily through its cheap labour markets. Indications are that this might be changing as it becomes an exporter of inflation.

Lastly, we need to factor in an exceptionally buoyant oil price which is likely to translate into inflation at some point.

A year ago, post the Covid-induced spike in yields which saw yields rising to more than 11%, local bond yields settled at levels that were very attractive, somewhere between 8% and 9% on the theoretical South African government 10-year nominal bond. In reality there is no 10-year bond in South Africa so this yield is implied and based on calculations. South African inflation was and is currently around 3% so there was plenty of inflation risk premium built into local bond yields. However, markets are clearly not convinced that there was sufficient compensation built into these yields.

Encouragingly, many of the other risks priced into bond yields a year ago are either no longer present or have diminished in size. A blowout in government finances appears less likely than it did a year ago; the risk of further downgrades appears to be less of a concern; and the prospect of getting the Covid pandemic under control with the vaccine rollout starting to take place, albeit at a snail’s pace.

South Africa is not alone in seeing rising bond yields. US bond yields have seen similar increases, as have some emerging markets. Credit default swap rates – in other words, the price of insuring against a sovereign default – remain relatively subdued in the commodity-based emerging markets for which we have data. If rising bond yields were a uniquely South African issue we would see this in a change in the cost of insuring against South African default risk versus the likes of Russia and Brazil.

South African bond yields were last at these levels - in May and September last year. The benefit currently, however, is that a significant degree of inflation risk protection has been built into the yield and the three key risk events are now behind us. It’s not often that markets give investors a third, never mind a second, opportunity to reconsider their investment choices.


This article was published by Business Day both online and in print. You can access both original publications by clicking on the intext links or on the images below: