The eighth in a series of weekly lockdown-inspired market commentaries, this week’s focusing on the forthcoming SARB MPC Meeting

Clearly last week’s South African coronavirus news wasn’t that we’ve passed the 50th consecutive day in lockdown but was President Cyril Ramaphosa’s address to the Nation on Wednesday evening which was interpreted, at least initially, to only be an intention to move the country to Level 3 but which was subsequently clarified to be a decision to move to Level 3. The address also subsequently came with a moderate relaxation in Level 4 regulations; including the reopening of online retail activity. Earlier in the week, which seems to have slipped by somewhat unnoticed, was a letter from the President saying the Nation was likely to have to deal with COVID-19 for a year or more.

Internationally, the total positive case count is now approaching 5 million. In the last two weeks, Russia (with the second highest number of cases at around 280,000) and Brazil (with the fifth highest number of cases at roughly 240,000) have seen a meaningful acceleration in the prevalence of the virus in their countries. Both can be considered emerging, commodity-based markets so provide some context to the South African coronavirus experience. Close to 320,000 people have sadly lost their lives. A number of European countries are, however, ‘unlocking’, (specifically Germany, Italy and Spain) with the United States, as a whole given that some States have already begun to do so, likely not to be too far behind. Markets appear to be grappling with the economic consequences of this gradual reemergence, as equity markets were down last week. As a sign of the times: Zoom now has a market capitalization greater than the world’s seven largest airlines, combined. Property, both local and global, appeared to be grappling harder as they were down last week somewhere between 5 and 10%. Much of this is on the back of listed property companies needing to hold back on dividends to shore up their balance sheets as tenants come under pressure.

From a macro-economic perspective, this week is likely to be a meaningful one for South Africa with the Monetary Policy Committee of the South African Reserve Bank (the SARB) beginning it’s three-day meeting on Tuesday. Interest rate announcements usually take place at around 3pm on the Thursday but don’t be too surprised to hear of an interest rate cut sooner than that as the market is already pricing in more than a 50% probability of a full 1% cut in interest rates (see the pink line relative to the yellow line in the chart below) which would take total cuts to 3.25% since the beginning of the year. The SARB’s inflation target is a range of 3-6%. The market is expecting inflation to average under 3% for the year, so comfortably below the mid-point of the range. And that’s the average of monthly readings for the year. The monthly low of the inflation cycle is likely to be around 1.5%. Out of interest, Ninety One’s weekly email points out that there have been 110 interest rate cuts around the world during 2020. 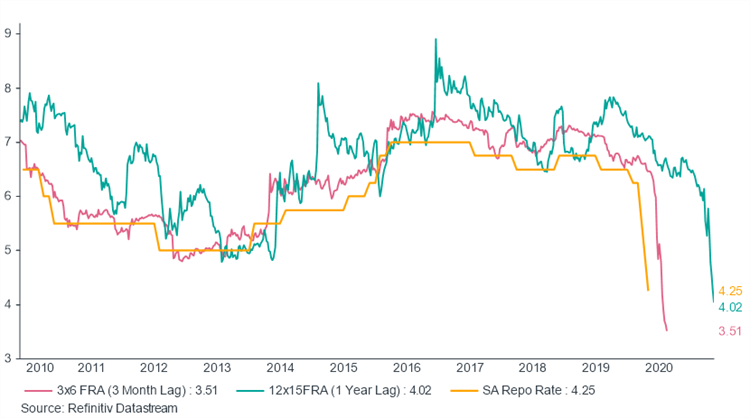 Also this week, S&P Ratings Agency updates their South African sovereign rating on Friday. Again, paraphrasing from Ninety One’s weekly email: there have been 102 ratings and outlook downgrades on 64 emerging market countries since the 4th of March this year. South Africa certainly won’t be alone amongst them. Moving beyond SA, we also expect Japanese GDP and UK unemployment data, among a slew of economic data, out this week. Much of the economic data is PMI-related. PMI = Purchasing Managers Index, an indicator of economic buoyancy on the supplier side. There’s an interesting wrinkle here: supply lead times are a component of PMI. Longer lead times generally being considered a good thing in PMI calculations as there must be pressure and/or investment going into the supply chain. At the moment, supply chains are close to breaking point making for longer lead times, so PMI’s are artificially high.

If the MPC does cut rates by as much as the market is expecting, the monthly repayment on a twenty-year R1 million mortgage entered into at the prime rate of interest will have fallen from around R9,500 a month in January to under R8,000 a month after this week. Multiply that by the many millions of outstanding debt and you get a sense of the materiality of the interest rate cuts by the SARB. That’s fair enough. The question that begs asking though is whether any of this saving is going to be redeployed into additional current consumption and/or longer term debt-financed consumption or whether it is simply going to be saved and/or used to shore up shortfalls in income, i.e. no change in current consumption.

This question obviously only applies to those who already have debt. Interest rate cuts are unlikely to lead those who are insecure about their future earnings potential into taking on debt they otherwise wouldn’t have had and where it does that debt is likely to be of low quality and geared toward current, less productive consumption. This all being a long-winded way of saying that the idea of interest rate cuts directly supporting economic growth is hard to make in this environment. Which perhaps goes some way to explaining why the banks are under such pressure: net interest margin is down and provisions for non-performing loans are likely to go up. JSE-listed financial shares, of which the banks are a sub-sector, are down around 45% over the last year.

All of which sets aside the important conversation about how productive debt is, as it is well-telegraphed (amongst financial market participants at least) that the planet has required greater and greater levels of debt to achieve the same increase in economic output. What does that look like when debt is increased further simply to shore up income statements in the short term? 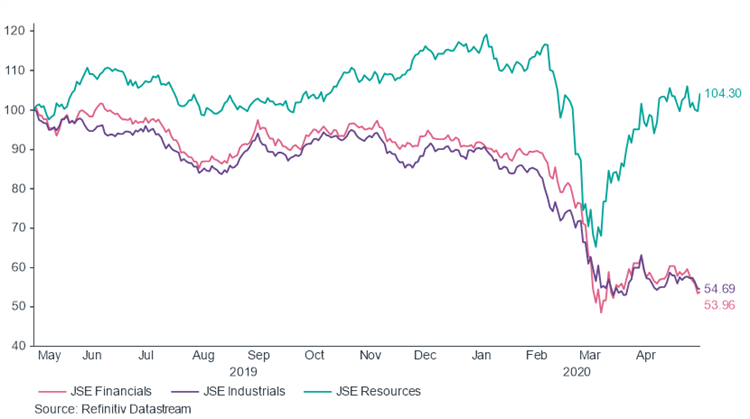 As always I encourage you to make use of the resources highlighted below and to access our weekly pack of market charts here. Stay safe. Stay positive.